Getting to La Cruz

We are now in La Cruz de Huanacaxtle, a beautiful fishing village in Banderas Bay, in the state of Nayarit. We are about 20 miles NW of Puerto Vallarta. The bay is the second largest in North America, after Hudson Bay. But before I write about La Cruz, I'll write about getting to La Cruz.


Ken and our friend, David Baraff, set sail from La Paz, Baja California Sur to La Cruz de Huanacaxtle on Thursday, February 9th and arrived on Sunday, the 12th  - three nights and four days to cover about 400 miles. It was a straight shot to La Cruz, no stops on the way. They had a great trip. For the first two days they travelled at about 7.5 knots in 15 to 20 knot winds with 6 to 8 ft following seas. They sailed with the mainsail and the genoa during that time. For the second half of the trip conditions were flat calm. They motored with the mainsail up the rest of the way. On day four, they saw many whales as they were coming into Banderas Bay. Another good siting was a dead, giant squid floating with sea birds devouring it. 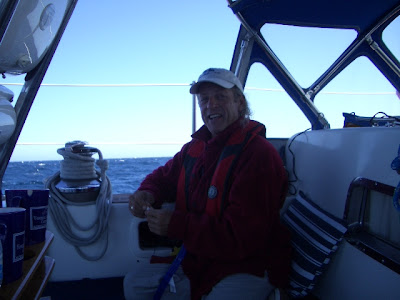 David in the cockpit 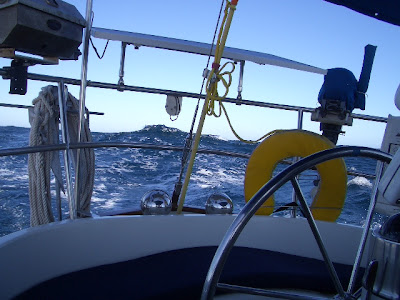 The following seas
Kyle and I (Christina) made the call not to sail with Ken to La Cruz. Instead of singlehanding it across the Sea of Cortez, Ken invited David to join him. Not only is David an excellent sailor and easy to get along with, he is also one of those people who needs very little sleep. What more could you ask for from your crew?

Why didn't Kyle and I sail with Ken?  Kyle and I weren’t sure four (or more) days on Sea Biscuit would be our best introduction to sailing on overnight passages (we have one overnight passage under our belt, sailing from San Carlos to San Juanico), so we took an alternate route.  We took the ferry, Baja Ferries, from La Paz to Mazatlan. Originally we tried to leave on the 6th only to find out that the holiday celebrating the signing of the Mexican Constitution on February 5th was officially on Monday the 6th and all the seats on the La Paz to Mazatlan ferry were taken. So we took the next day’s ferry on Tuesday the 7th. Thanks goes out to our La Paz, Marina Palmira neighbor Brenda from Firefly for driving us to the ferry. It was very nice not to have to take the bus or a taxi up to Pichilingue where the ferry departs.


We got a cabina, a sleeping room, on the ferry. It had two beds, clean sheets, blankets, a bath room with a shower, and a window. The window looked down on the viewing deck and the loading ramp on the stern end of the ferry. Kyle loved the view from the window. Minutes after we found our room, Kyle settled in to watch as the ferry ramp was raised up, asking me to tell him a story while he watched.
We set sail on the ferry at about 5:00PM, due to arrive about 9:30 Wednesday morning.  We ate dinner, watched the featured movie in the main salon where most of the passengers slept on reclining seats, and then wandered around on decks before going to bed. The full moon lit our way as we sailed East. Kyle slept like a log despite the rumbling of the engine.
The fares for the ferry were 978 pesos for an adult and 489 for a child, plus 770 pesos for the cabina (the exchange rate is about 12.7 or 12.8 pesos per dollar, so the total was about $175). The price tag was a bit higher than the numbers I found on the web, but within the same ballpark. The fare included dinner for both of us, a buffet dinner of fish or enchiladas with tortillas and beans, and breakfast, which was chiliquilas and juevos mexicanas, plus beans and tortillas. Coffee was extra.

The little girl in the picture above was travelling with her mom and her little sister, who must have been about 6 months old. We waited in line with them on Tuesday to get onto the ferry.  On Wednesday morning, despite sleeping in the public area, she was dressed up and ready to go. She was so pretty I had to take a picture.
We arrived in Mazatlan at about 10AM the next day, too late to catch the bus to Puerto Vallarta. We found a hotel, the Hacienda Hotel on the malecon, and our taxi driver took us to the bus station to buy our tickets for the next day. I think we managed to pick the noisiest hotel, despite the noise, the view was impressive (click to see a short video from our hotel room). 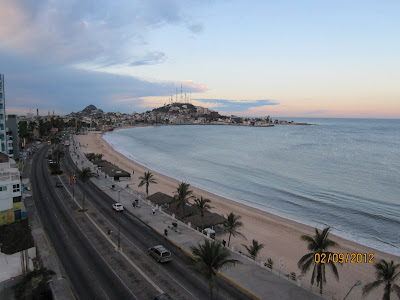 Thursday, February 9th we took a TAP bus from Mazatlan to Puerto Vallarta. This was the nicest bus ride Kyle and I have ever taken. We were presented with a sack lunch as we boarded the bus, containing ham and cheese on white bread, a cookie, a small coke, and powdered coffee.  The seats reclined further than an airplane seat and the leg room was tremendous. We had a television and headphones to view any of the three (or maybe it was four) movies playing during the 8 hour drive.  The bus stopped twice along the way, first in Tepic and the in La Penal.  In Tepic we were allowed to get off and stretch our legs for about 20 minutes. The cost for the bus ride was 400 pesos for me and 200 pesos for Kyle (about $50 total for us both).
We stayed three nights in Puerto Vallarta.  Again, we managed to find one of the noisiest locations in Puerto Vallarta at the Belmar Hotel Galería. The bus routes for a number of different buses seemed to pass by that hotel. Nonetheless, the location was good, in the Zona Romantica and close to the Zona Centro. We enjoyed exploring Puerto Vallarta and the Rio Cuale. Kyle had a great time playing on the hanging bridge connecting the island in the middle of the Rio Cuale with Puerto Vallarta and playing on the banks of the Rio Cuale.


The scultpures along the malecon were as good or better than the ones we saw in La Paz. 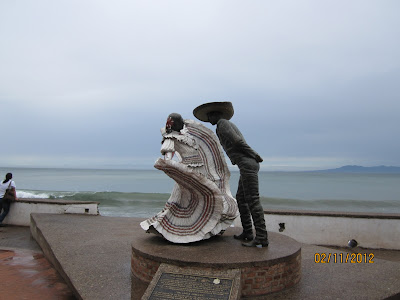 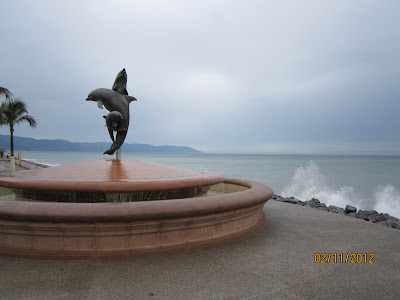 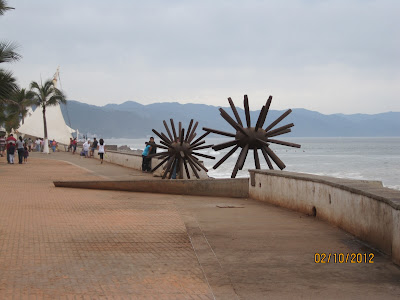 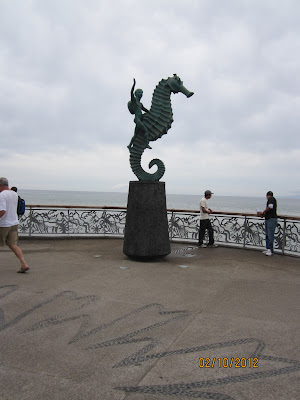 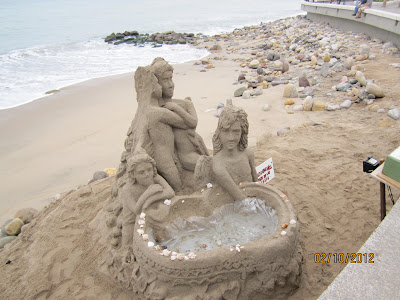 For the second and third nights, we moved over to the Cuatro Vientos hotel near the Cathedral and had a much better night’s sleep. The chiming church bells didn’t bother us at all.


Near the cathedral we found a vegan restaurant where Kyle and I enjoyed an excellent dinner, Planeta Vegetariano. When Kyle likes vegan, you know you’ve hit paydirt. As Kyle was eating his soup, he said, “This is great.We have to bring Dad here!” 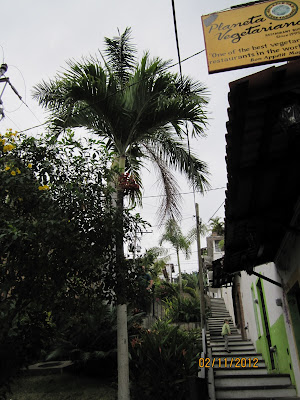 The street where we found Planeto Vegetariono, Iturbide, and the next street parallel to it, Mina, were my favorite streets in Puerto Vallarta. There were beautiful plants and parklike open areas flanked by sidewalks with stairs climbing up to the street where our hotel was on Matamoros.

Kyle and I took the local bus on Sunday, February 12th from Puerto Vallarta to La Cruz. That Sunday a portion of the streets the bus drove on were closed off to traffic to allow for the first Via Recreative (Recre-Active Way) in Puerto Vallarta. Pedestrians, pets, bicycles, skates, and other non-motorized vehicles had the road to themselves.  The same organizations behind the Via Recreativa are lobbying for bike paths in the La Cruz to Puerto Vallarta area.  A nice blog post from PV Pulse has more on it.


We arrived in La Cruz in the afternoon and walked over to the marina. We had just arrived at the marina office when we met our first family with kids from the sailboat Convivia - Tucker, Victoria, Ruby, and Miles. The kids hit it off immediately with Kyle joining Miles and Victoria in some impromptu playing and racing around. I was pleased to hear Victoria say she had seen a link to our Sea Biscuit blog on the Del Viento blog site.  Thanks Mike and Windy for keeping your list of Cruising Families!


Ken and David arrived at about 7PM. It was as if the welcoming committee had arrived when they sailed in.  Kyle, Ruby, and Miles raced over to the boat as they pulled into the slip.  Kyle was so happy to see Sea Biscuit, he jumped onto the rail and was getting ready to climb in.  At the same time Ken was moving the boat over to the other side of the slip.  Dan from Endorfin was worried that Kyle was going to fall in so he tried to pull Kyle off, only to be pulled into the water himself.  Kyle was holding on so tight, nothing could pull him off!