It would make our lives much easier if we could sell Sea Biscuit soon in Puerto Vallarta. We are reducing the price to $139,000. Please let us know if you are interested before we list the boat with a broker and raise the price to cover the broker's commission.

Many of you have said you, your friends or partners would love to live aboard a sailboat and sail the world's oceans. Now is your chance! Sea Biscuit is a very well maintained and well equipped 43 foot Skookum Marine Slocum cruising sailboat built in 1985.
Price - US$139,000   Click here for details. 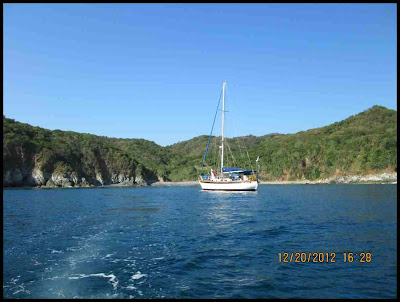 After much deliberation we have decided it is time to sell Sea Biscuit. This wasn't an easy decision. Ken suggested we tell everyone the reason we are selling Sea Biscuit is because I hate living on the boat. Why? For reasons such as - the space is too small, it's too much togetherness, it's an inefficient way of life, Kyle would do better in a traditional school, etc.  Although all of that is true, I have enjoyed living on the boat, but I feel like I have been caught in a permanent vacation and want to go home someday.

Note - the listing information is also available at Sailboatlistings.com, but it's easier to read on the link above.

The second city we visited after arriving in Ecuador in February was Cuenca. To get there from Guayaquil, we drove our rental car through the beautiful Cajas National Park. We stopped for a walk and lunch, but the weather was cold and rainy, so we opted for just enjoying lunch from the small restaurant near the visitor's center. It was raining so hard I didn't pull my camera out. We were glad we brought our warm clothes and raincoats!

We stayed at the La Casa del Centro bed and breakfast in downtown Cuenca. The owners were wonderful. They helped us with restaurant suggestions and ideas for parks and other places to visit. The B&B  is very centrally located. The rooms were OK. They were clean and everything was high quality. The part we did not like was that the rooms were small and had no outside windows. Not having outside windows probably did make them quieter. We didn't notice any street noise from inside.

We enjoyed walking around the city and visiting the archaeological site/park by the river. We arrived in Cuenca on the weekend that Ecuador starts its celebration of Carnival (four day event). We did our best to stay out of the way of people carrying buckets of water and kids carrying cans of silly string. The goal is to squirt and douse as many willing people as possible. Luckily, we did not look "willing" and no one sprayed or doused us in Cuenca. In Cuenca you could avoid the dousing because it is has been such a problem in the past that Cuenca passed a law making it illegal to douse the unwilling.

As whitewater enthusiasts, we found the area along the river very inviting. It looked as if an enterprising person could start a kayaking rental and shuttle business. It looked like a challenging run through town- class 3 to 4.

We also enjoyed the market. It was just a few blocks from our hotel. The market covered most of a city block. To us, it was exactly like the National Geographic photos of the busy market filled with indigenous peoples from various parts of the country. The bottom floor was for meat vendors. The second floor was mostly produce. The third floor was all little eateries. One row was pork with about 20 whole roast pigs, head and all, one at each of the eateries. They sliced hunks off of the roast pigs to fix comida tipico for their patrons. Comida tipico seemed to be a portion of meat, a serving of rice and a serving of lentils and beans. The other side of the market was a similar row of vendors selling comida tipico with chicken. We found a few places with fish. We chose comida tipico with fish for our lunch. It was $3.50 for the three of us. The food was good.

While we were buying some fruit, the fruit vendor's little girl came over with her silly string can and was getting ready to squirt Kyle. We said, "No! No!" Luckily she resisted the temptation.

We ate at several restaurants in Cuenca. I remember two- the Cafe Eucalyptus and the Raymipampa. The venues were nice but we were disappointed in the food at both places. 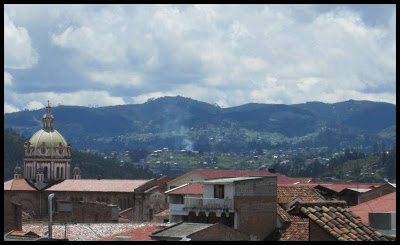 On our second day in Cuenca we walked to the Parque Arqueologico Pumapungo which included a zoolike enclosure of about 10 different bird species and a beautifully landscaped garden reminiscent of the ancient Incans. 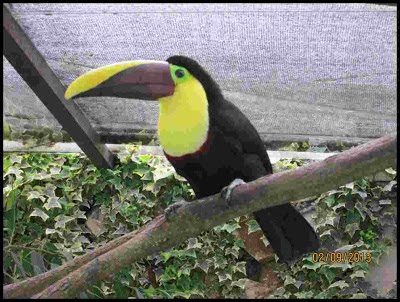 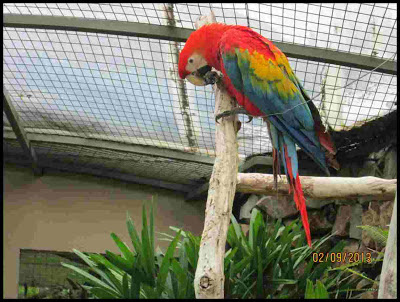 Posted by Voyage of S/V Seabiscuit at 9:45 PM Leave a comment... 0 comments