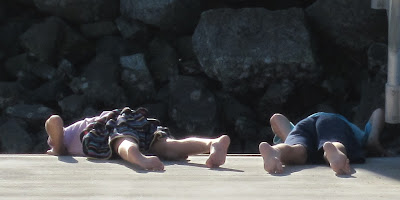 Kyle and Ruby spent an afternoon searching for interesting sea life off the edge of the docks. They found limpets and seaweed and with some help even had a puffer fish in their collection bucket. They hoped to open their own version of the La Cruz aquarium and charge admission. 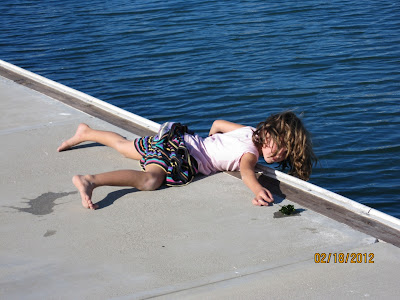 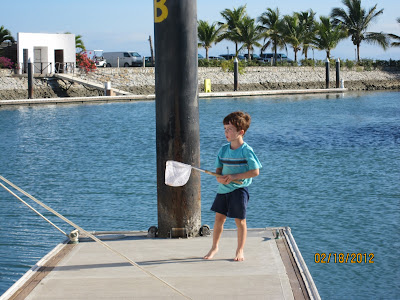 Keene from the boat Shanti Ana, on the same dock we were on, was an avid puffer fish catcher and educated Kyle on the fine points of netting and releasing these fish. Kyle loved helping Keene with his catch of the day. Kyle and Ruby kept some of the puffer fish in a bucket for viewing and petting (we released them later). A few generous souls even put money in the bucket to encourage their efforts. Here is a link to the YouTube video.

Boat Boarding
Kyle and Ruby were out playing around at the beach a few days ago. Ruby was floating on her boogie board and Kyle swam over and said, “Mexican army boarding your boat.  Show me your paperwork!”  Ruby said, “Oh no, I don’t have my paperwork!”  Kyle said, “I’m going to have to take your boat.”  He pretended to try to take away her boogie board.

We haven't been talking about the Mexican Navy boarding boats lately, but while we were in La Paz, we would see the Mexican Navy come through the marina every day, sometimes twice a day. We heard a number of other people from sailboats say they were stopped and their boats boarded. The Navy would request their paperwork; however that was the extent of it. The sailors all said the process was professional and friendly. Here in La Cruz, we haven’t seen the Navy patrolling the marina in the same way and haven’t heard of boats being boarded.

While not here for boat boarding, we have seen a lot of the Mexican navy and army in La Cruz with all the security surrounding the sailboat races that were taking place recently (Mexico Cup Races). The president flew in by helicopter for the opening ceremonies. The local people in La Cruz didn't seem particularly interested in a presidential visit and more often seemed to be cursing all the helicopter traffic overhead. On a related tangent, we found out the reigning champs of the Mexico Cup races were in the slip next to ours in the marina - Flojito y Cooperando. We enjoyed having them as our neighbors for a short while.  Unfortunately their reign didn't continue, they only took first in their class this year and second overall.

Kid Lunch
Ruby and her brother Miles, from Convivia, were on the dock next to ours for about a week days before they set sail for the Marquesas this last Monday, March 19th.  In about 7 months they will arrive in Australia and New Zealand. Kyle talks about how much he misses Ruby and asks if she will be back in La Cruz. I feel bad I can't tell him when or if they will be back, but it seems we have to get used to saying open ended goodbye's. After all, we aren't going to be in La Cruz forever either.


Before they left, Kyle and I took Ruby and Miles out for lunch at the Octopus's Garden and ice cream on the plaza. 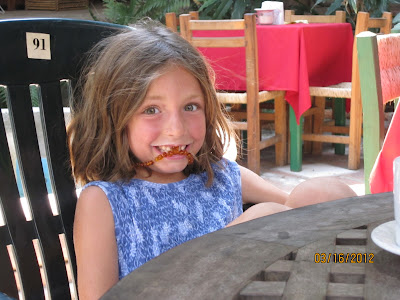 Ending this post with a few pictures of Kyle, Ruby, and Miles and Cooper playing. 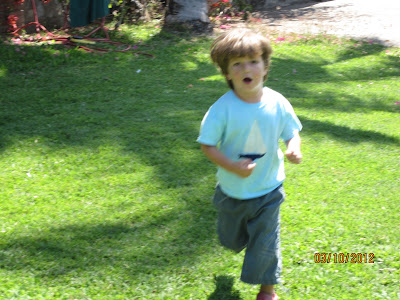 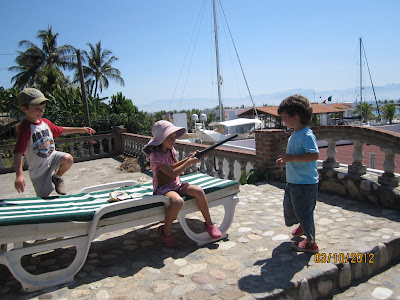 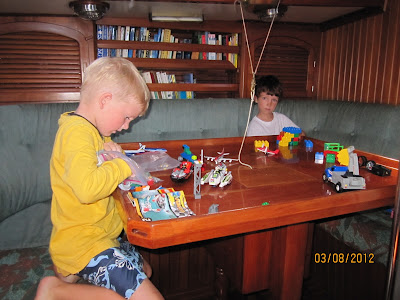