Kyle went to another birthday party a few weeks ago (October 20th). His friend Kenny turned 6 and had a pool party at another friend’s house in Nuevo Vallarta.


The kids had a great time playing in the pool, eating hamburgers, and sharing cake with Kenny.  Kenny was born in California and both he and his mother speak perfect English. I think Kenny sometimes helps Kyle at school by translating for him. The couple hosting the party were from the Yukon (the wife) and from Mexico (the husband). Other folks at the party were Spanish speakers, so I had a chance to practice some Spanish and also chat in English.

written by Christina
Posted by Voyage of S/V Seabiscuit at 1:15 PM Leave a comment... 0 comments

At the Fish Market

Next to the marina is the La Cruz Fish Market. Every few days we go there to buy fish.  The other morning I was buying tuna and saw the most beautiful blue fish laying on the sales counter. From what I understood of the fishmonger's Spanish, these are parrot fish. One of these days maybe we should try eating one, but Kyle says he wouldn't want to eat one because they are too beautiful. We have obviously moved away from being totally vegan and now eat quite a bit of fish (even Kyle). 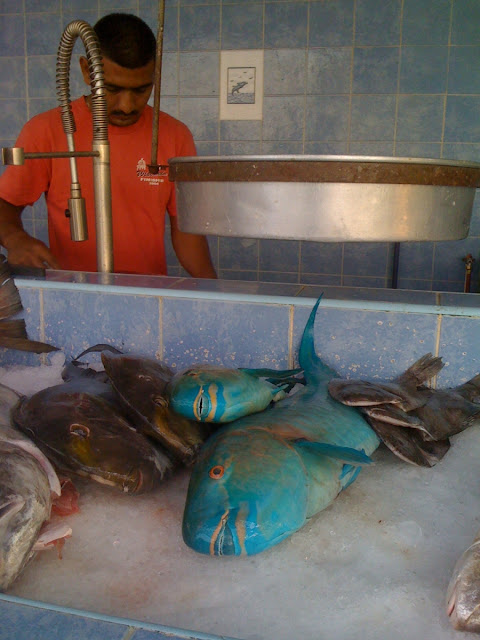 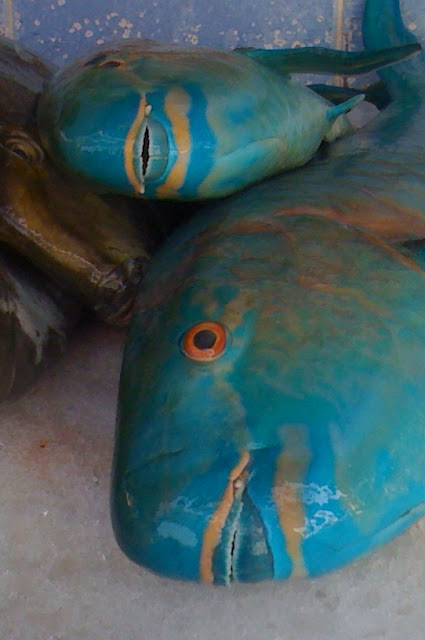 I am adding this comment I got from a friend of my Mom's - Jerry Sue -
"Yes, those are parrot fish. We've seen (and heard) lots of them while SCUBA diving and snorkeling. They chew on the coral - make quite a racket crunching away - and then poop lots and lots of sand. That's where many of the white sand beaches come from. No joke!"

Thanks Jerry Sue - How cool!

p.s. We love hearing comments from you. If there are any, you can see the comments by clicking on them at the bottom of each post.

A Weekend Away from the Heat - Mascota, Jalisco

The weekend of October 5-7th, 2012 we escaped from the heat of La Cruz and drove up into the mountains East of Puerto Vallarta. We left from Kyle's school in Bucerias and sixty miles/two hours later we arrived in Mascota. Mascota lies at 1,268 meters (4160 ft) where we found the temperatures very comfortable. 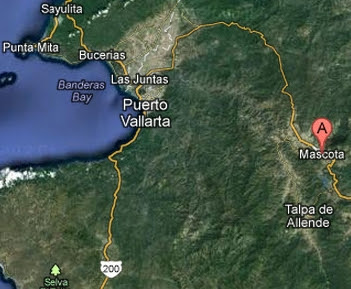 While the name Mascota in Spanish means "pet", the town's name is actually a combination of two Teco words, one meaning snake and one meaning deer. The area around Mascota is agricultural and forested. We didn't encounter any snakes, but we were warned by the locals not to hike in the dryer parts of the forest where the scorpions were out in force - it's their mating season and apparently they are very aggressive.


Up the road from our hotel the church bells rang every quarter of an hour during the day, starting at 6AM. Luckily they didn't seem to ring all night long. We liked the red, neon lights illuminating the cross at night.

The temperatures were chilly enough that we even wore our jackets as we drank our coffee outside our hotel room.

Saturday morning we visited the energy vortex in Yerbabuena, a small town outside of Mascota. We read that the energy vortex in Yerbabuena, the Centro Magnetico - Tubo de Luz, can cure your aches and pains and each of us did as directed - standing in the center of the vortex with eyes closed, channeling the sun's energy. I think Ken did the best job of all of us. Kyle and I didn't seem to have the same patience that Ken had. 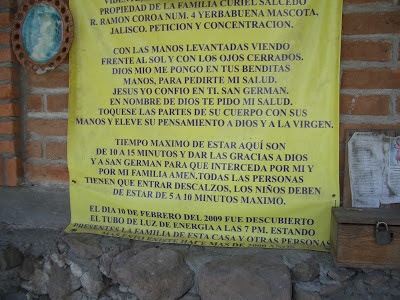 Later on Saturday Kyle found another boy from a neighboring room at the hotel to play with - Daniel. We invited Daniel to join us on our visit to a museum and on a walk up to the cross.

The Raul Rodriguez museum paid tribute to Mascota's history. One room was dedicated to Mascota's Esther Fernandez, a star of the Golden Age of Mexican Cinema. The other rooms had paintings from a Mascota artist, farming equipment, and display cases full of old artifacts. Kyle and his friend Daniel liked the old guns and money on display best.

After the museum visit we walked about 20 minutes up to the cross for a view of the valley.

We also visited an archaeological site where the ruins of an old church stand next to a modern church.

As we left Mascota we had an interesting discussion with Kyle about cock fighting spurred on (no pun intended) by the acre or two of tentlike houses and roosters at the cock farm located on the road to Mascota. I didn't manage to get a picture of it, but I found quite a few on the web like this one.
Posted by Voyage of S/V Seabiscuit at 9:31 PM Leave a comment... 0 comments

Stand Up Paddle Board Race

In late September Ken and Kyle entered the third Stand Up Paddle Board race held here in La Cruz. There were serious athletes and amateurs alike all competing. The goal was to grab three balloons from the buoys located at various positions along the race course. The balloons were numbered and the numbers corresponded with prizes. The prizes ranged from coconuts to dinners to Vallarta Adventures Zipline tours.

Since it was getting late we didn't stay for the awards ceremony and it seems maybe our balloon prizes went to someone else. Kyle didn't seem to mind.  He was worried his prize would be coconuts.
Posted by Voyage of S/V Seabiscuit at 11:42 AM Leave a comment... 0 comments


On September 2nd, right after Shandro's birthday there was another event here in La Cruz - the first Riviera Nayarit VW Festival and exhibition hosted by the Vallarta Volkswagen Club.  Kyle and I went with Allison, Shandro, and Matero. We saw both classic and newer, show-quality VWs. 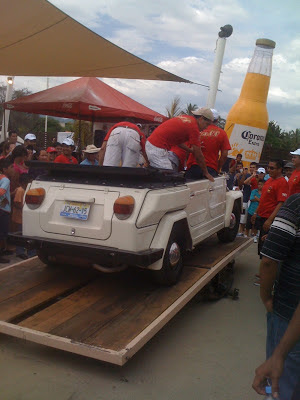 The VW Thing reminded me of my childhood when my family had a Thing in Belen, NM. I'm not sure if this car won the contest or not.  The cars without all the passengers to do the balancing were the most impressive. In those, the drivers had to do all the work.

This blog post is a bit late and a bit out of sequence, but I wanted to post a few pictures from the pool party that Shandro McAssey's family (from SV Kenta Anae) threw to celebrate his 10th birthday at the beginning of September. Shandro invited friends from school, family friends and many people from the marina. Thanks Shandro - it was a great party!

And some fun pictures of Shandro, Matero, and Kyle playing with Regis from Flying Dragon. 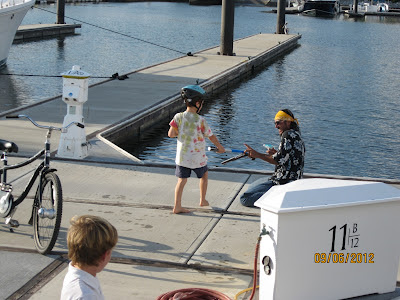 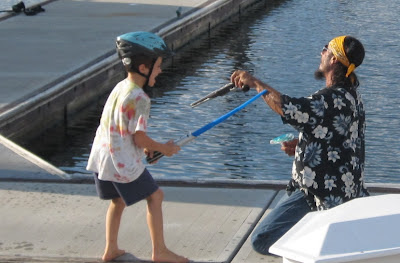 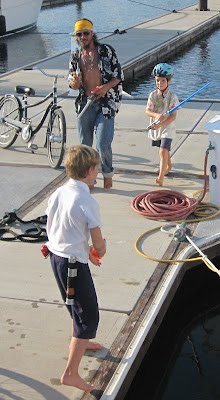 A quote from a conversation toward the end of Shandro's party - Allison and Merle's friend Dave turned to Regis and asked, "Are you sure you aren't Johnny Depp's brother?"

Posted by Voyage of S/V Seabiscuit at 8:54 PM Leave a comment... 0 comments

Installing seats in the cockpit has been on our list of boat projects for Sea Biscuit. Putting seats in would extend the seating area and allow us to stretch our legs and lie down. Last Spring we had Ron from the boat named Valerie K make teak seats for us.  They fit the space perfectly. Last week Ken finished installing the seats. Unfortunately we broke the camera as we were taking pictures of the seats, so these below aren't the best, but you get an idea of what they seats are like.

Now we will be able to sleep out in the cockpit.

I decided that the hot humid weather and my hair just didn't mix well so a couple weeks ago I went in to the hair stylist and had her cut my hair. Nothing too crazy, just a lot shorter.

I liked the bob haircut ok, but it didn't offer the relief I was hoping for from the heat. So late last week I went in for a second haircut. I got immediate heat relief and a much simpler hairdo for living on the boat.

No, we haven't tried eating iguana or any other exotic dishes lately. Instead, I saw an iguana eating a mouse. I was picking some fruit off of the thorny bushes that line the marina and an iguana skittered out. He had something hanging from his mouth. It was a live mouse the iguana was trying to gulp down. From what I gleaned on the internet, iguanas are normally herbivores but now and then eat mice or birds.

We regularly monitor the VHF radio on Channel 22 to listen for weather updates and to listen for other boats hailing us. We rarely get called, but sometimes the parents of Kyle's friends will call asking us to send them home for dinner. To hail someone, you state one to three times in succession the name of the boat or station you're calling, followed by the name of your boat, once.
Quite routinely we hear a boat named Star Fish hailing a boat named Easy Lady.  The gal from Star Fish will say, "Easy Lady, Easy Lady, (short pause) Star Fish." I often laugh when she is hailing her friend on Easy Lady because, well, because Easy Lady is a funny name for a boat. Recently Kyle asked Ken and me why we were laughing about it. I set out to explain why "Easy Lady" isn't a nice thing to call a woman. Fairly quickly I found it was getting too complicated for a six year old and simply said, "It's not a polite thing to call another woman" and "I'll explain it to you in more detail when you get older."  He seemed satisfied with that answer.

Another one of our neighbors, Jim, had a boat named "Against the Wind." He had a long story about how the boat actually had an inappropriate name given to it by the previous owner who was a plastic surgeon. The name - Big 'Uns. So on his way to the office where he was going to sign off on the final paperwork to purchase the boat he was listening to the Bob Seger song, Against the Wind. Since no other names came to mind as he sat down in the office, he decided to name the boat after the song. Jim said it seems to be his reality - he and his boat are always going against the wind.
Posted by Voyage of S/V Seabiscuit at 10:23 AM Leave a comment... 0 comments