from San Carlos to La Paz - written by Christina

Quick summary of our recent travels - we left San Carlos on Saturday, December 17th and arrived in La Paz on January 5th.  We are in the marina here and are enjoying warmer weather, electricity, internet, and enough fresh water to wash our hair and get regular showers.  I'm going to try to write in reverse chronological order about our trip - so you may want to start at the bottom of this blog post to follow along.
Today, January 10th, Ken is working on the holding tank, a time consuming job with numerous workarounds required. After our morning of homeschooling, Kyle and I went into La Paz. Our neighbors have a truck and dropped us off downtown in the afternoon.  We visited the downtown cathedral and on the plaza Kyle chased pigeons. We did some grocery shopping and walked back to the marina. 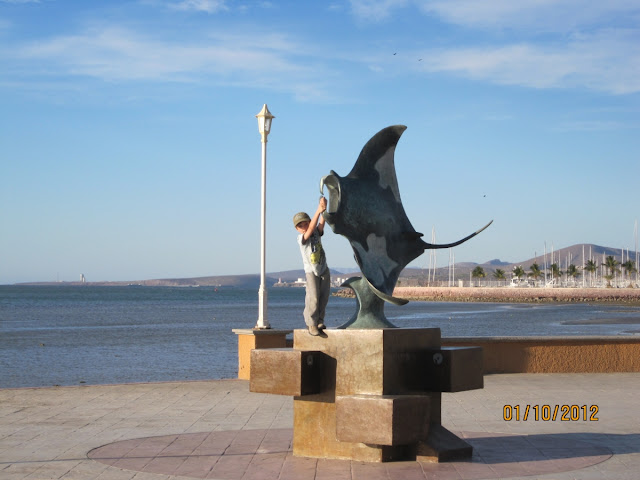 One of our favorite sculptures along the boardwalk (malecón) – the In-flight Manta.  Bronze statues like this one, ranging from 5 to 11 ft tall, line the more than 5km walk along the Bay of La Paz. 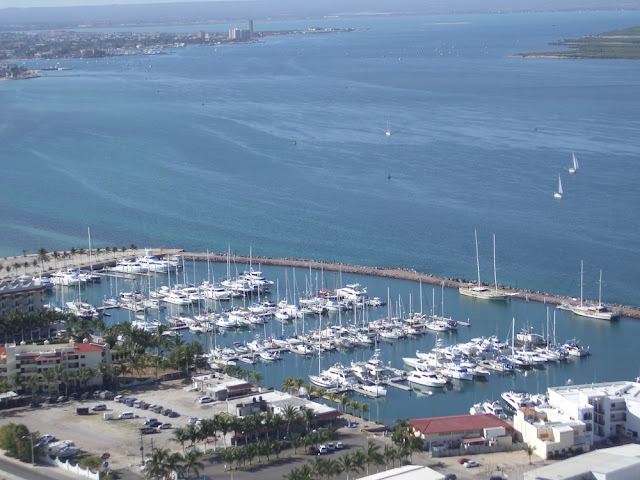 Picture of Marina Palmira from a hike Ken took to the top of the hill East of the marina
A few days ago we celebrated Ken's birthday. We celebrated with singing (off key), homemade cards, and spontaneous gift creation by first mate Kyle.  Kyle decided his dental flossers wrapped in hand decorated wrapping paper would be a nice gift.   When a gift is given with complete sincerity, it’s hard not to feel grateful for the effort.
LEAVING ISLA SAN FRANCISCO


On our way from Isla San Francisco on Wednesday (1/5/2012) Ken raised the mainsail for a bit of stability and to catch any wind.  We were motoring at about 4knots to Bahia Falsa. As we got underway Kyle lobbied hard for us to get out the fishing pole. At first we argued against it, but finally relented and got the fishing pole and the cedar plank lure out. Kyle seemed to be looking forward to fishing again (he had some success fishing in June, but we tossed the fish back in because they were so small).


In about ten minutes we caught our first fish, a black skipjack.  Ken pulled it in and doused it with cheap tequila to sedate it a bit and then took the hammer to put it out of its misery.  Immediately Kyle started begging him to throw it back in, arguing that the fish was too small to keep.  As Ken continued with the job, Kyle started crying and begging more urgently for him to stop.  He cried that the fish was beautiful and too small.  It was quite traumatic.


Ken fileted the fish and we had delicious fish tacos that night.  At first Kyle didn’t want to eat any of the tacos, but when dinner was served he changed his mind, all the time talking about how when he gets older he and his mother are going to patrol the ocean’s waters for fisherman and stop all fish catching.  He plans for us to have a business where tourists can look at fish caught and placed into tanks near the cruise boats but the fish are allowed to swim free after one day of viewing.


The following three nights he asked for fish tacos again.


We anchored at Isla San Francisco on the 2nd and 3rd of January. 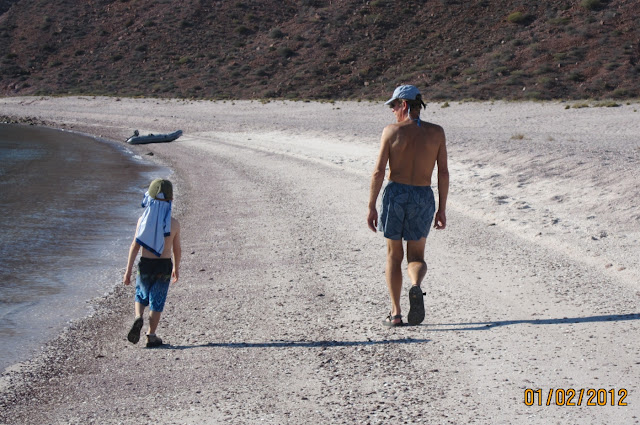 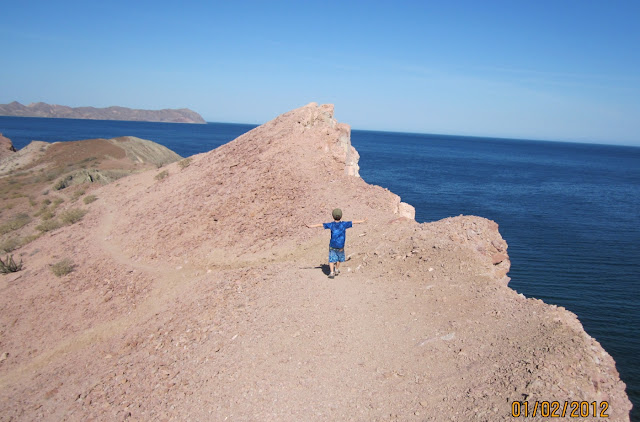 Kyle on a walk on Isla San Francisco 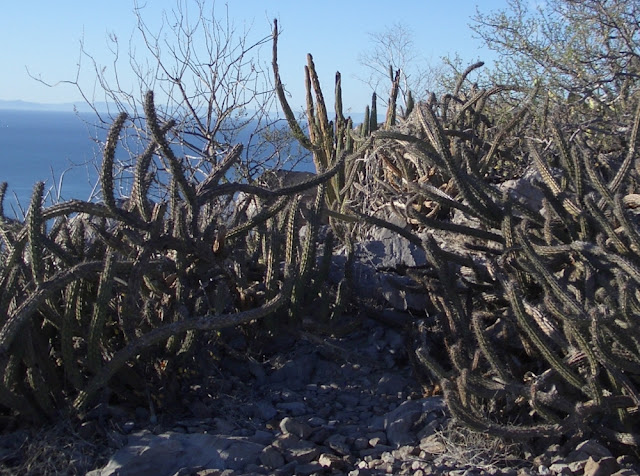 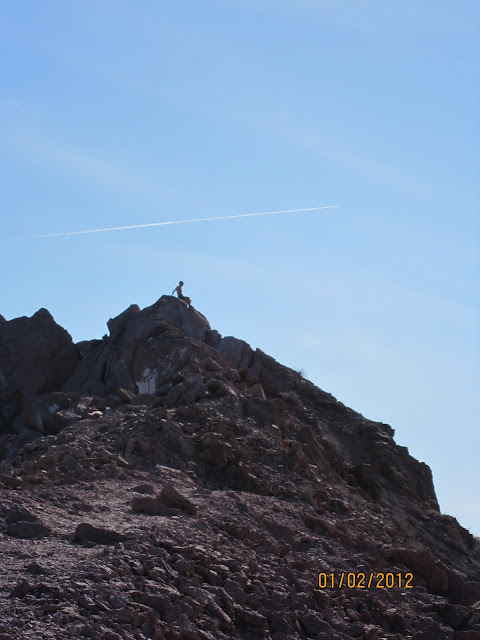 Ken on top of the world. 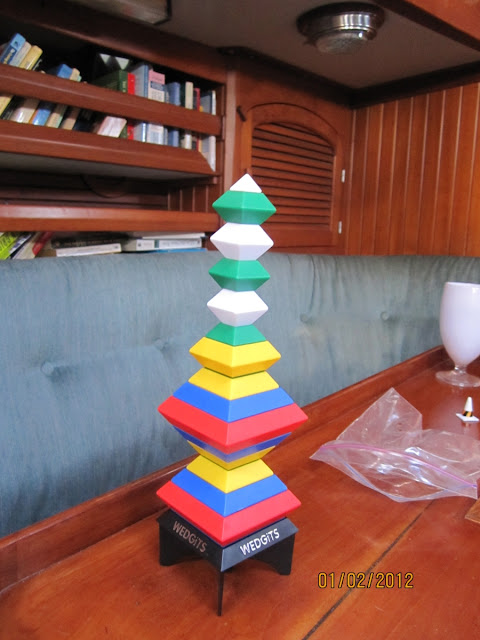 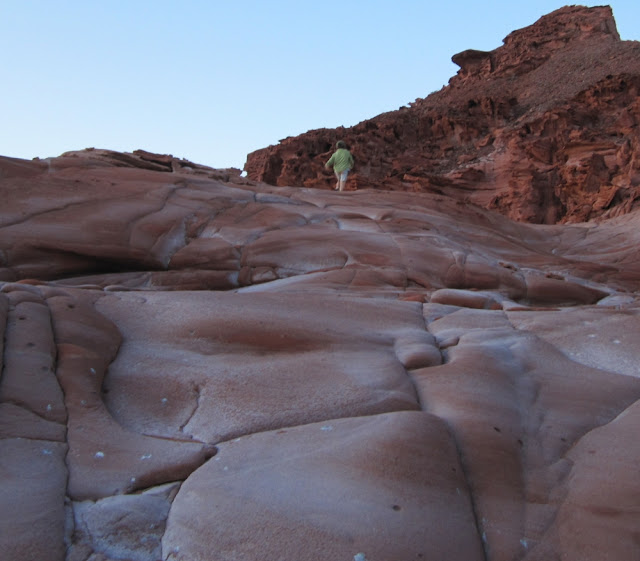 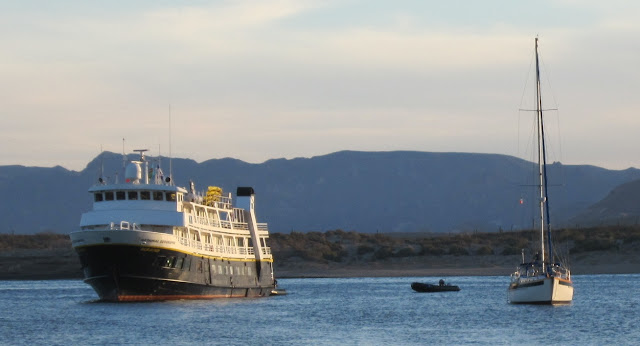 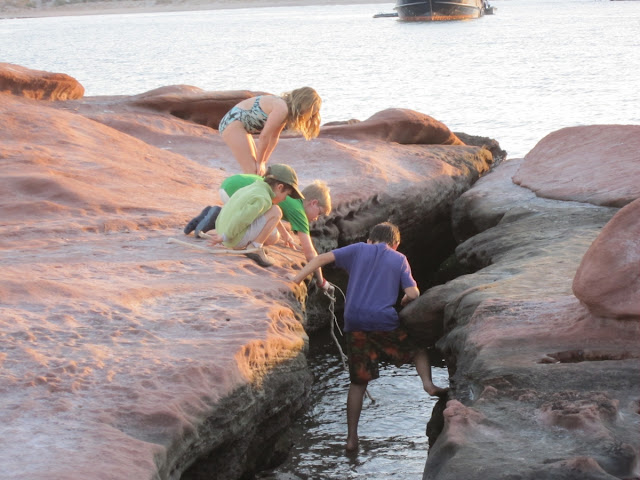 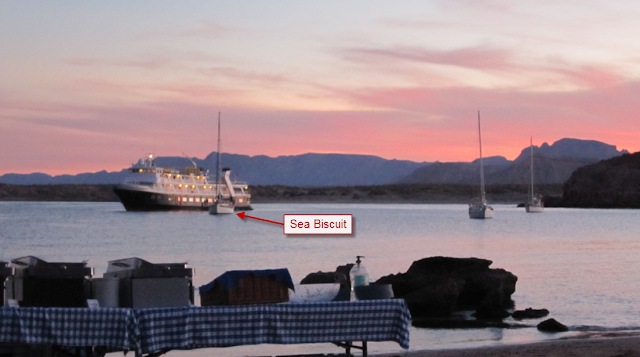 The crew from NG's Sea Bird invited us and the folks on the other two sailboats to join them for dinner. 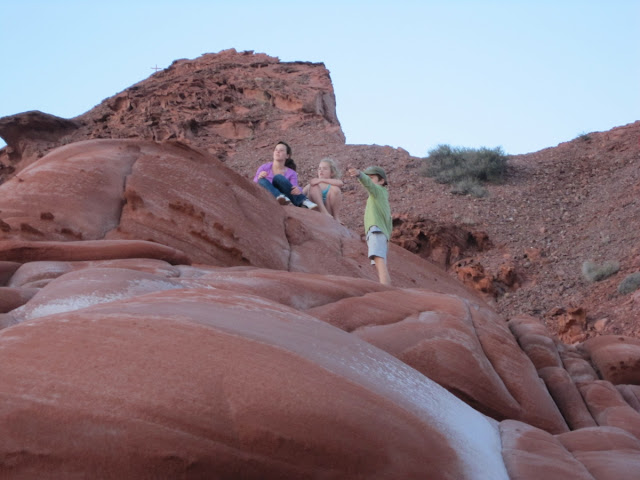 After we'd been in San Juanico for two nights, Don Anderson’s warnings of windy weather on the SSB radio convinced us to move to a mooring ball in Puerto Escondido.  Puerto Escondido had friendly sailors and allowed us to visit Loreto, 25 minutes away.
Kyle enjoyed creating sculptures on the beach and we visited the San Javier mission, about an hour's drive West into the Sierra Gigante Mountain range.  We drove through dry desert to find an oasis in the mountains where the mission is located. 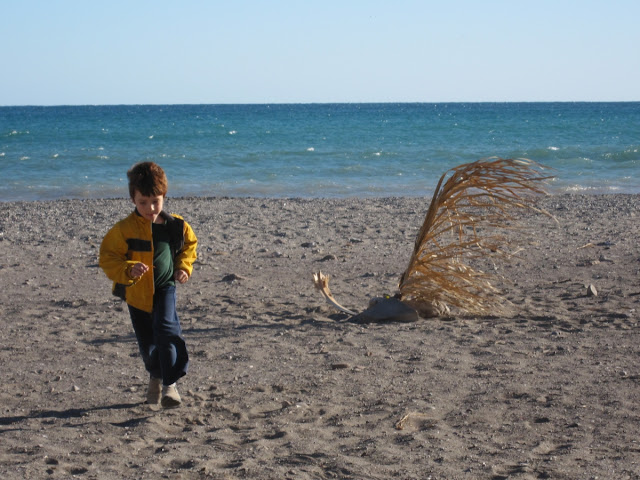 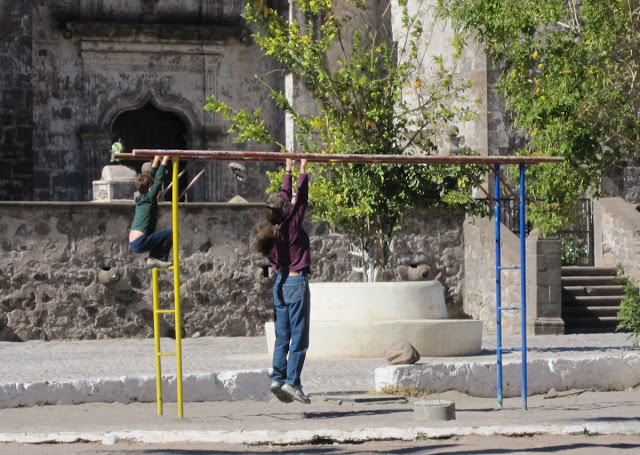 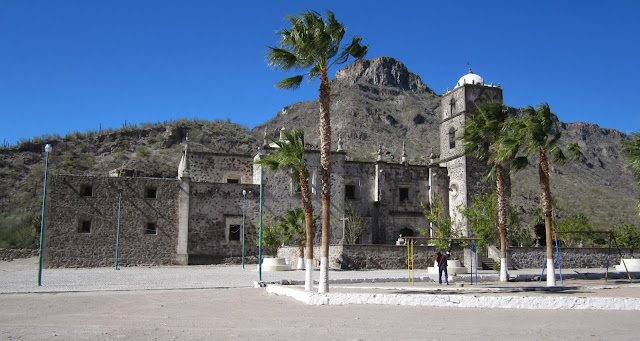 After our visit to San Javier mission, we stopped at a playground in Loreto.  There we met and became friends with a family from Nelson, British Colombia staying on the beach close to Puerto Escondido.  We visited them once and they paddled/pedaled their sea kayak out to visit us once.  It was nice for Kyle to have a friend to play with. 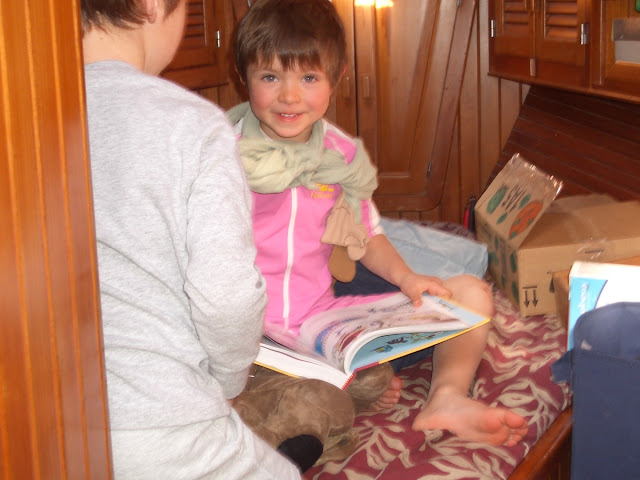 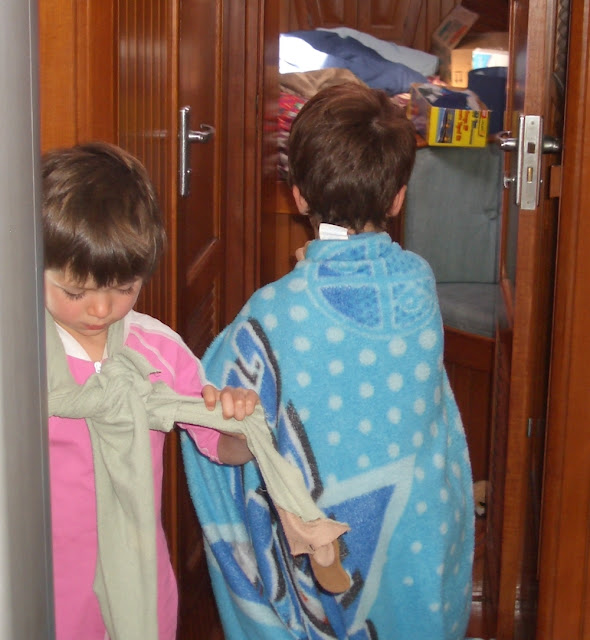 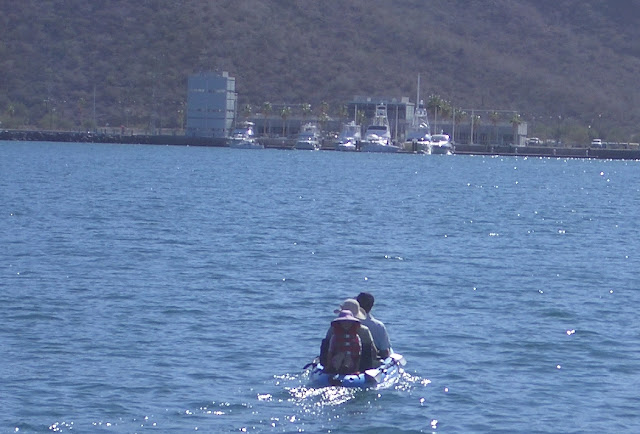 Lume and family paddling back to Rattlesnake Beach 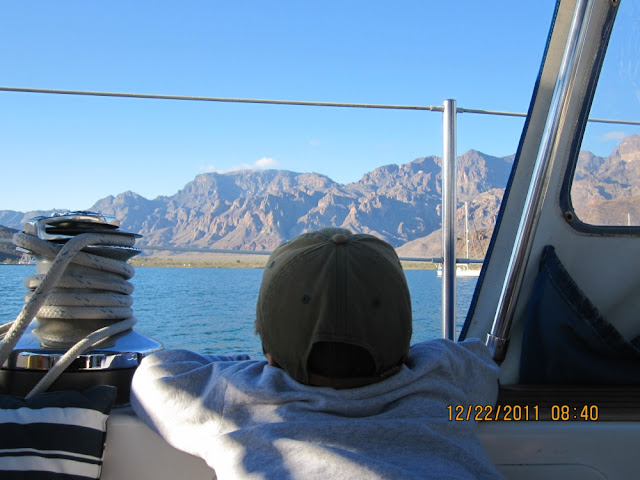 View of the Sierra Gigante range from Puerto Escondido 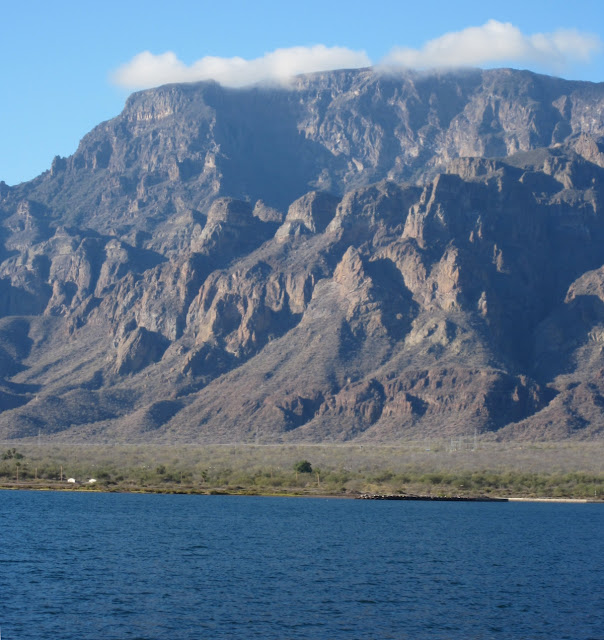 Puerto Esoncido
We spent Christmas in Loreto at a hotel. Ken decided he wouldn't mind getting off the boat for a couple days, so for our sanity (Kyle was getting pretty antsy to run around and Christina wasn’t sleeping well with all the wind) we decided to go into town.  We spent two nights, long enough to wish we were back in our comfortable beds on Sea Biscuit.

When we left NM, Grannie sent some presents with us for Kyle, we also brought some and Santa managed to fill Kyle’s stocking and bring a few more presents on Christmas day.  It was a refreshingly toned down Christmas.  I forget what we ate for Christmas dinner – it was something healthy and at the time I didn’t miss the turkey and stuffing.  Although I must admit I did feel a serious pang of envy when Lume's mom told me they had a potluck on Rattlesnake Beach with the 15 other RVers.  They enjoyed a delicious feast with turkey, ham, three kinds of potatoes, etc. I can't cheat on the near vegan diet the way I used to when I would go out to lunch with friends at work. 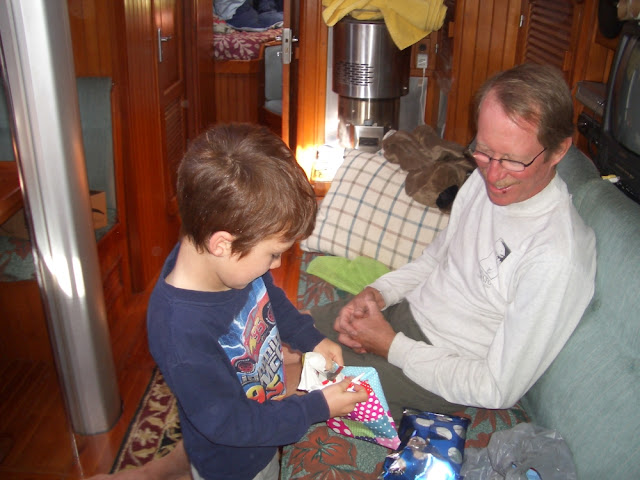 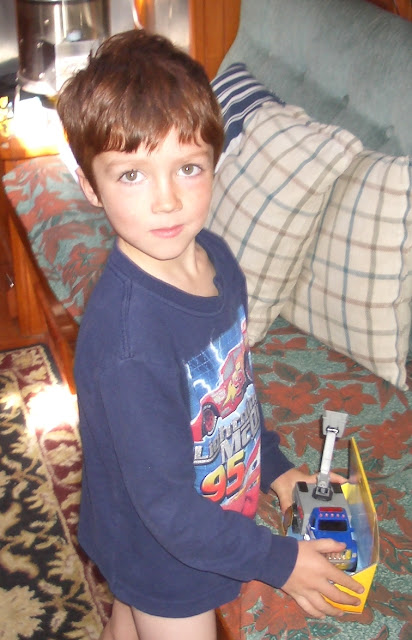 We left San Carlos at about 11AM on Saturday, December 17th and arrived on the Baja side of the Sea of Cortez in San Juanico around 3PM on Sunday, December 18th.   During the day we motored with the mainsail and the jib up  - at a speed of about 4 or 5 knots.  After dinner, we decided to kill the engine to enjoy some peace and quiet and sailed at about 3 to 5 knots until 5AM on Sunday.  Ken stayed on watch until about 1:30AM when I took my turn until 5AM. Around 5AM we had a squall that made sailing rocky and uncomfortable.  We started up the engine and motored the rest of the way, travelling at about 4 knots.
We stayed in San Juanico two nights and thoroughly enjoyed it. After a month at the San Carlos marina it was nice to finally have a peaceful anchorage and warm weather. It was so nice on the first day that Kyle stripped off all his clothes to play around in the water.  Pictures below of our first evening in San Juanico. 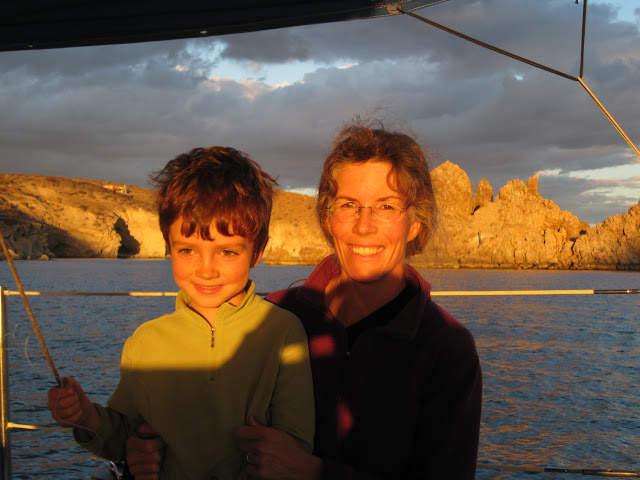 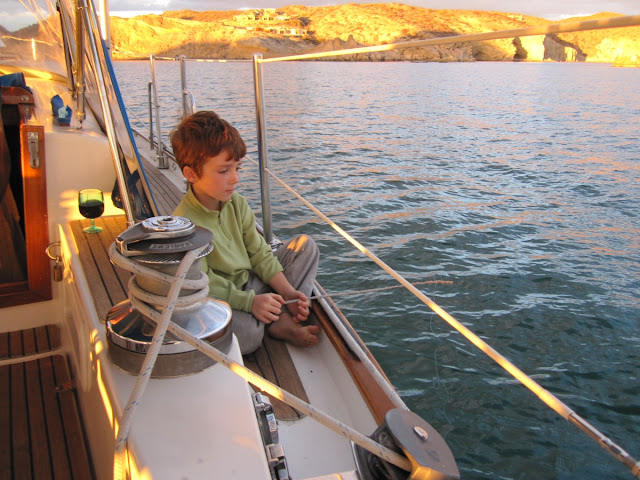 Kyle fishing with his home made fishing pole while we had some wine. 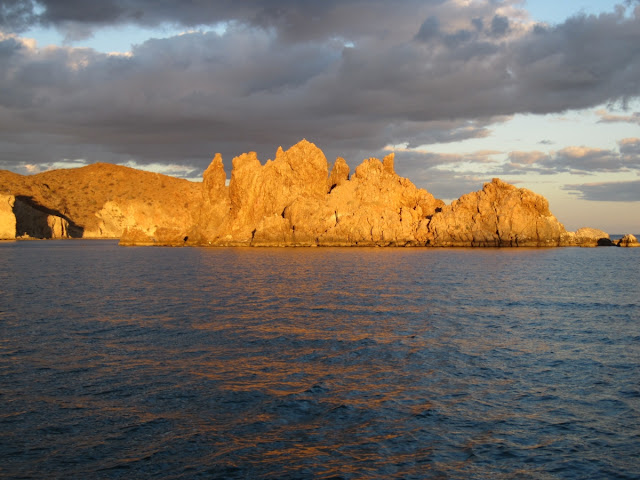 Sunset lighting up San Juanico
Posted by Voyage of S/V Seabiscuit at 12:19 AM