While we were in Ecuador during Carnival week (in February - still catching up on the blog) we decided to book a few days in a hotel up in the hills, far away from the hustle and bustle and water throwing in the bigger cities. Ken found Hacienda Uzhupud on the internet and it came with good reviews. Google maps said it should take about 40 minutes to get from Cuenca to Uzhupud. Little did we know that everyone in Cuenca would be driving to Gualaceo for Carnival celebrations on that same day and Uzhupud was on the way to Gualaceo. So the trip took around 1 ½ hour, not to mention the time we spent being lost looking for Hacienda Uzhupud. The signage to this hotel was a bit limited until you got off the main highway, then there were ample signs to show us where to turn.

The rest of the hotel guests seemed to have the same idea we had – stay somewhere quiet without the chaos of Carnival. We met a wonderful family from Quito who we became friends with. They had a 9 yr old daughter who Kyle had fun playing with. We regret not travelling to Quito to visit them.

The highlight of the stay in Uzhupud for Kyle was getting a chance to ride one of the horses. The hotel had half a dozen horses available for riding around the grounds. Unfortunately, the first horse Kyle got on was quite unhappy and would not walk quietly. It had a sore under its girth and was constantly reaching back trying to figure out what was giving it so much pain and to try to alleviate the sore. When he wasn’t doing that he was trying to buck and run. After just a few minutes Kyle was begging to get off and get another horse.

Kyle got a turn on a calmer horse and loved having some time riding around. He hadn't ridden a horse for a couple years, since visiting our friends Lee and Candie to ride Weed in Nambe or visiting Joey and his girlfriend to ride their horses in Albuquerque.

At this same time we were in the middle of reading the book Sea Biscuit to Kyle, so it was good timing to have a horseback ride. Before we left for Ecuador, Kyle took "Sea Biscuit" as his nickname and every where we went in Ecuador he would gallop around, whipping an imaginary steed, and ask if we wanted to race him. 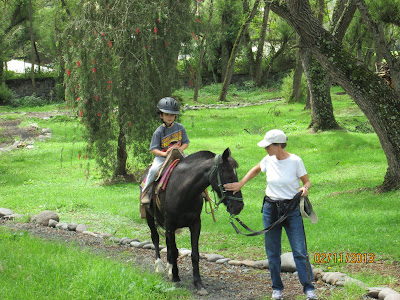 The horse trainer who was supervising all the riding decided to ride the unhappy horse, as if he would work off some of his oats. The trainer promptly fell off at the first corner, in part because the saddle wasn’t on tight enough and it slid off!

Posted by Voyage of S/V Seabiscuit at 6:38 PM