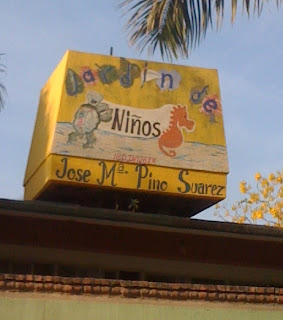 Kyle has been going to school since early March. He attends a kindergarten that is about three blocks up the road from the La Cruz marina.

Each morning Ken or I walk Kyle into school. We walk by the town plaza and a dog that lives at a house next to the plaza happily walks along with us each day, hoping Kyle will play with him. School is from 9AM to Noon. After his first day at school, Kyle said with some disappointment that school was all play and no challenging works (at the Montessori school Kyle used to go to the kids each had “works” to do). He said, "We just play, play, play." We explained that his goal should be to listen to the Spanish and try to pick up some words. He didn’t need to succeed at any challenging work, just listen and learn. Besides, going to kindergarten in La Cruz doesn’t get him out of home schooling, we do challenging works on the boat.

Kyle’s best friend from school is Angel. Angel speaks some English and seems to help Kyle figure some things out in school. Angel's mom is 1/2 American, 1/2 Mexican. She and her husband are bringing up Angel and his little brother to speak English and Spanish. Kyle has gone over to Angel's house a couple times to play and we have enjoyed having Angel come over to the boat for a visit. He and Kyle like playing in the little pool that the marina recently put in. 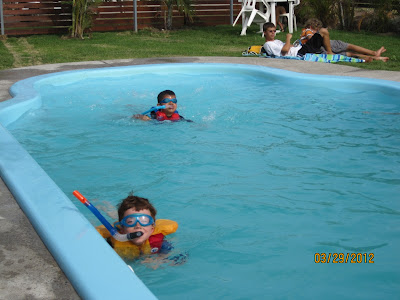 The whole town celebrated the first day of spring with a parade. There were many princesses and princes. Kyle didn’t start school in time to learn the dances and songs that the kids performed at the amphitheater near the marina after the parade. Angel had a dancing role and Kyle’s friend Savannah, from Endorphin, who until recently was going to the same kindergarten, was also one of the dancers (thanks Lisa for some pictures). 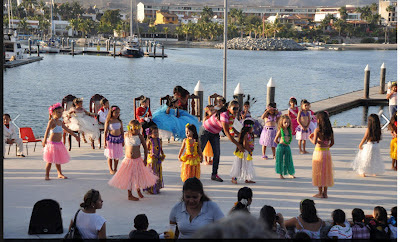 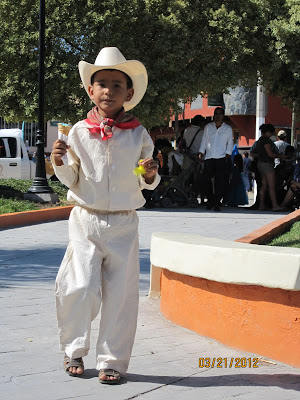 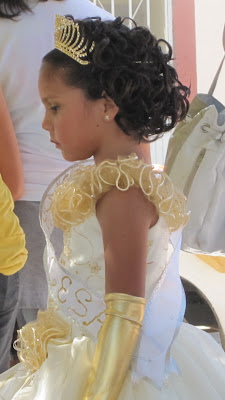 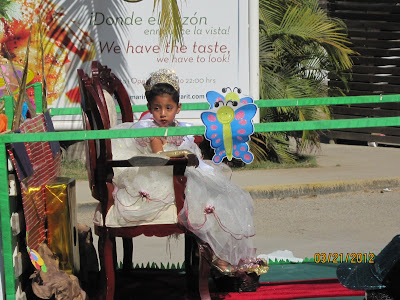 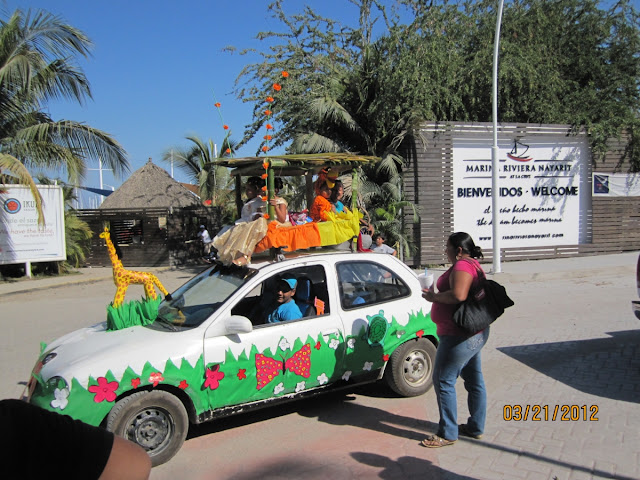 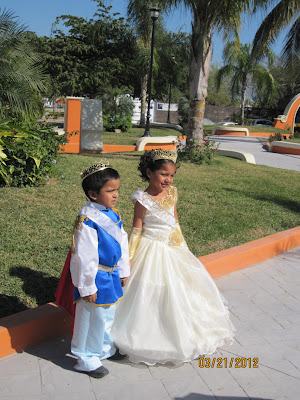 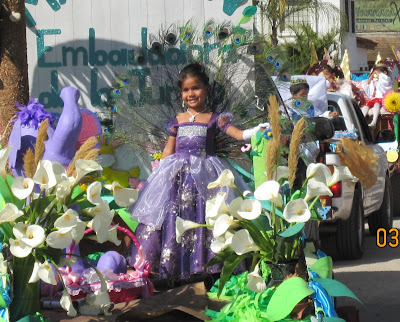 There seem to be a lot of days off at the La Cruz kindergarten. In April Kyle only had two weeks of school. April 2nd to April 14th, Semana Santa (Holy Week) and Semana Pascua (Resurrection Sunday through the next Sunday) are traditional weeks off for kids at school. Semana Santa is a week most of Mexico takes off.


We didn’t go on a vacation for Kyle's Spring Break, mostly because all the beach towns and roads are very crowded during this time; instead, we worked on homeschool materials, Kyle played at the pool and played with the neighbors. We made sure to stock up on groceries so we wouldn’t have to go to the large grocery store and battle with tons of other shoppers.


Despite not going to school very often, Kyle seems to be picking up some Spanish.  Every few days he will come home and ask me, Mom, do you know what the Spanish word for _______ (fill in the blank).  I’ll say “No” to see what he has for an answer and he will proudly tell me the new word he has learned.  He’s quite disappointed if I tell him I know the word already.

The other day Kyle tried to trick me by telling me his teacher was “en vacacciones” for the next few days and there wouldn’t be any classes. This actually happened in March, the teacher went on vacation and then she was also sick that week. There haven’t been any substitutes filling in for her. We have heard that at the primary school the teachers sometimes don’t come to work because they haven’t been paid recently.

There is a calendar in the play area of Kyle’s school.  The box for March 18th had an oil rig picture marking the day they commemorate Mexico’s expropriation of oil.  We thought Kyle might have that day off from school also, but luckily he didn’t.

From this link you can see Kyle, clad in uniform, playing with a butterfly he caught one day on his walk home.

One of the best parts about school for Kyle is the ice cream man selling small cones for 6 pesos right outside the entrance/exit gate as the kids leave school at noontime. It's the new price of the commute to school (but Kyle only gets ice cream on Mondays and Fridays). I figure it's at least a little better than the man selling cotton candy outside the school in La Paz, Baja California Sur.

Posted by Voyage of S/V Seabiscuit at 6:21 PM