After a long hiatus - finally a blog post.
Kyle and I are preparing for our first Christmas without Ken. I will post some or all of the tribute to Ken that I wrote up after he died last January after seven and a half years of battling prostate cancer.  That post may not happen until after the holidays.

This is a hard time of year but it helps to think back on all the good times we had together. One of my favorite Christmases was our 2011 Christmas in Loreto, Baja California Sur, Mexico. At the time, we posted a few pictures (see the Christmas in Loreto post), but didn't have the bandwidth to post the videos of Kyle opening his presents. This year, after recovering the data from my dead laptop, I can finally post the video. It's short but fun.

Kyle has been making videos of his own recently. He'd like to post them on his own blog site - yet to be created. Maybe over this winter break from school, he and I will get his new blog up and running. 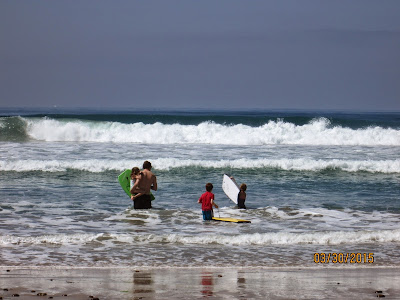 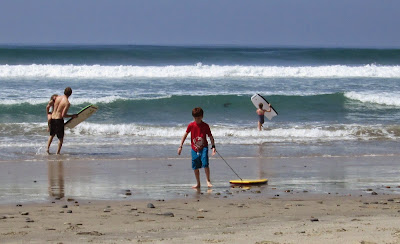 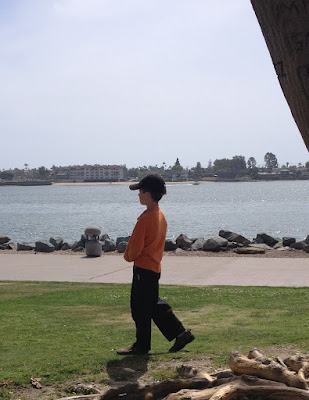 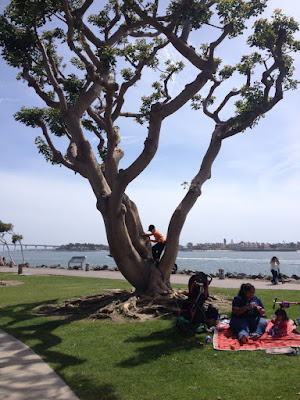 Posted by Voyage of S/V Seabiscuit at 9:48 AM Leave a comment... 0 comments

We attended a wonderful wedding in early January 2015.  My beautiful cousin, Kristin, married her beau, Matthew, here in Santa Fe.  Kristin and Matthew are two of the most generous and kind people we know.

The ceremony had Quaker and Suffi elements. During the Quaker period of silence, the guests were encouraged to speak. Family and friends spoke eloquently about Kristin and Matthew. My favorite speech was when one of Kristin's family friends, Zander, stood up and talked about how Kristin has been like the mother he never had, Brigid has been the sister he never had, and Thomas, his best friend, is like the brother he never had.

A few days later, Ken, Kyle and I were talking about how much we liked the speeches. Kyle's favorite was when Zander's dad, Randy, welcomed Matthew's dog, Shilo, to the family.  Kyle said, "If you would have encouraged me a little, I would have given a speech to say Kristin is the best eye doctor and I will never go to another eye doctor in all of Santa Fe."  (Kyle has had a couple emergency visits to see Kristin - she is a godsend!).  I told Ken and Kyle that I was getting my nerve up to give a speech about how Kristin has been like the sister I never had, but didn't stand up and speak because I was hoping there would be speeches after the reception dinner - especially since a version of the "like a sister" speech had already been done so well. But I missed my chance when the dancing directly followed the dinner.  Sigh.

The reception dinner was delicious.  It was followed by a delectable wedding cake made by Matthew and his father and dancing into the wee hours.

A few pictures (some professional) and videos (definitely amateur) from the ceremony:


The flower girls and cousin Pamm coming in.


Brigid and Thomas coming in.


The Bride and her father.


One last video - Kids dancing before the official dancing started:

After a Year on Land

(written by Christina)
We haven't posted for a year now and I thought I should give a quick update on things.

We have now been back on dry land in New Mexico since last May. Sometimes we look at the pictures from the 18 or so months we spent on Sea Biscuit and pinch ourselves to see if it really happened.

Since last year, Kyle has completed second grade. Yay Kyle! His last day was the Tuesday before Memorial Day. So far he is enjoying his summer break.

As for the adults in the family, I have been back at work at the State Engineer's Office since June 2013 and Ken is now officially retired.

Over Memorial Day weekend we had a nice visit from Ken's sister, her husband, and Ken's brother.

One of the more notable things we did on the weekend was a Rattlesnake Avoidance Class. No - Kyle and I know to avoid rattlesnakes, it was Sea Biscuit (the dog - who now goes by Biscuit for short) who we were trying to train up*. Kyle and I took Biscuit to the training offered by the Natural Solutions folks out of California (I am assuming they are based out of California). The class was just outside Stanley, NM, not too far from Moriarty. Stanley is a town I can't say I have ever visited. It was a scenic setting for Rattlesnake Avoidance Class.

We waited our turn until Biscuit was taken out into the field to learn what he could from the two rattle snake avoidance trainers. They had diamond backs and prairie rattlers stored in a cooler or cages under a shade protector and muzzled (their mouths were taped shut with veterinarian approved tape).

The snake handler placed the snakes strategically in the field and the other trainer led Biscuit around to explore. As he approached the snakes and they caught his attention, the trainer would give him a correction with the shock collar Biscuit was wearing. Biscuit figured out he didn't want to have much to do with the snakes pretty quickly.

The training took about 7 minutes.  Kyle asked the trainer what kind of grade Biscuit would get if he were in school. The trainer paused a moment and said thoughtfully that he thought Biscuit would receive a "B" grade. Kyle and I were pleased with this grade.

*You might be wondering if rattlesnakes are all that common here. We seem to see about two or three a year. One of our big motivators is the fact that our last dog, Truck (now a very happy member of our neighbor's home - Thank you again, Pui!), was bitten by a rattlesnake a number of years ago. It was an experience we would like to avoid.

Posted by Voyage of S/V Seabiscuit at 6:33 AM Leave a comment... 0 comments

We have a new family addition to announce - Sea Biscuit the dog. He is a welsh terrier puppy. Ken and Kyle picked him up last week. So far he is a great puppy. 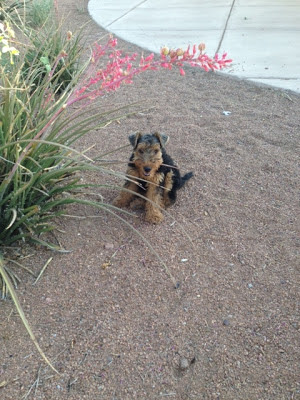 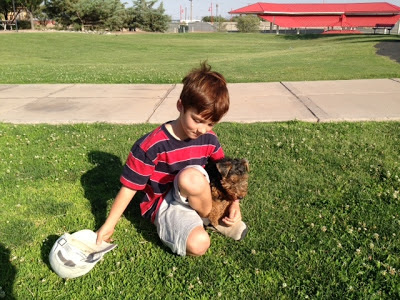 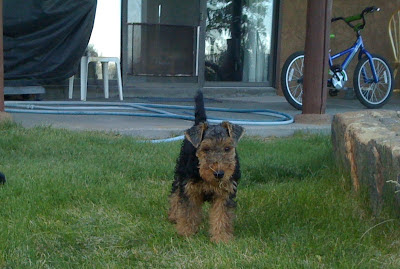 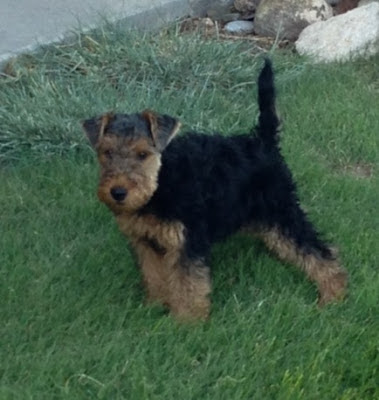 Even though Sea Biscuit now has new owners and we are settling back into life on land, I am continuing to (slowly) catch up on pictures and stories from our time aboard. This post is about Barra de Navidad, on the Costa Alegre of Mexico (the red marker on the map below). 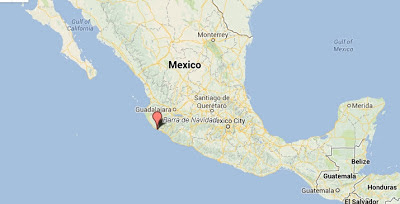 Below are pictures from our first visit to Barra de Navidad when we stayed in the lagoon (Where we were eaten by mosquitoes and tortured by the local fisherman out fishing at 5:00AM right next to our boat) and also from the time we had Sea Biscuit in the Barra Marina (late January, February and March 2013).

One highlight of our time in Barra was being able to take Kyle's bike on land. We explored the Grand Bay Hotel's golf course (respecting the golfers, of course).

Our friends from Harmony, Robert and Virginia, were also in Barra de Navidad right before Christmas picking up kids and grandkids for a visit. We all went across the golf course to the beach. Kyle had a great time playing with Coco and Toby. 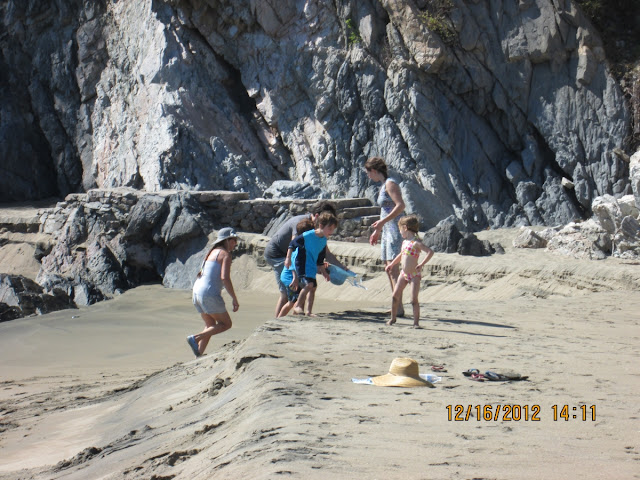 The map below shows you the general location of the hidden beach (green arrow) and the Barra de Navidad Lagoon.

View SV Sea Biscuit Map in a larger map
The Green Arrow and dot in the map above show where the hidden beach is. The Blue marker to the East is where we started our walk along the beach after crossing the golf course (green line). The sailboat in the lagoon was our approximate location when we anchored in the Barra Lagoon.  And the blue marker near the sailboat is the little dinghy dock we used to get to the golf course.


Pictures from February and March 2012.